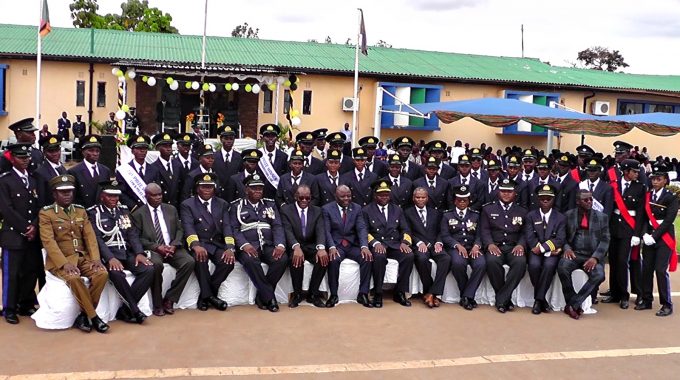 Having successfully completed an intensive five-month training programme, which commenced on 11th November, 2018, the Immigration Assistants will be posted to the neediest of the ninety-eight (98) stations across the country.

“The Department you are joining today, deals with matters of national security and is our Nation’s first line of defence against people and organizations that may not want Zambia to succeed, thus, you will be required to exercise patience and restraint at all times, to avoid putting the security of the country at risk,” The Minister said.

“The Ministry of Home Affairs and the Government at large, moreover, has a zero tolerance for laziness, corruption, nepotism, dishonesty and lack of respect for public resources, property and established order”

The Guest of Honour did not hold back from warning the new officers on the dangers of operating outside the confines of the law. “Observance of the law and faithful adherence to the national principles and values are critical to any successful career in the Security Services, in particular, and the Public Service at large,” He said.

“It is incumbent upon our Immigration officials to ensure that Zambia reaps the benefits of migration at the lowest possible cost, which is essential, as we have a duty to promote tourism, foreign direct investment and ensuring that essential, but scarce skills are easily brought into the country to support the expansion and growth of firms and the economy at large”.

The new Immigration Assistants brings the total staff strength of uniformed officers to eight hundred and seventy-four (874), making it one of the most understaffed Departments in the Ministry given the size of our country and the fact that it is surrounded by eight countries and with an extensive border of about 5,600 kilometres.

“Criminal elements and gangs are taking advantage of advances in transport and information and communication technologies to commit transnational crimes, ranging from terrorism to human trafficking, smuggling and money laundering,” The Minister said.

“Keeping borders sufficiently open to promote commerce and trade, while keeping out criminal elements and gangs to ensure the security of persons and property has, therefore, become more complex”.

Speaking at the same event, the Director General of Immigration, Mr. Denny Lungu thanked the Zambia Police Service for allowing the Department to use the infrastructure and personnel to train Immigration Staff.

“I would therefore, like to take this opportunity to thank the Inspector General of Police, the College Commandant and the instructors of the college as well as my full time and part time instructors from my own department for their hard work and contribution in training the next generation of immigration officers”. Mr. Denny Lungu said.

The Director General also had some advice for his new staff. “You must endeavour at all times to live by all the department’s core values, which are loyalty, service, transparency, efficiency, confidentiality, collaboration, impartiality and the mother of all values, integrity, which guarantees all the other values,” He said.

This is the second intake of Immigration recruits to graduate in three years, last intake being the 2016 intake which graduated on 23rd June, 2016.